The first day of the European election is likely to start with a bombshell: Tomorrow, the Netherlands and the United Kingdom are the first countries to vote in the European election. The Brexit Party will very likely become the largest single national party in the new European Parliament.

There will be no exit polls for the United Kingdom, and counting of the votes won’t start until Sunday. Hence, we will not be able to learn about how the 46.8 million voters in Great Britain and Northern Ireland have voted on election day. Albeit, the polls are very clear: The new Brexit Party under Nigel Farage will become the largest single national party in the UK and even across the EU. Our projection currently sees the Brexiteers at 28 out of 73 seats. This result would also mean that the Brexit Party gains the largest number of new MEPs compared to 2014 of all national parties running in the EU (28, as the party did not stand in the previous election). UKIP, in the meantime, will face the most devastating loss of all parties on the national level across the EU as the party is set to lose all their MEPs (receiving 24 less than in 2014).

We need to keep in mind, however, that the polls are extremely volatile in the United Kingdom at the moment, which means that the Brexit party could very well get more than 30 and less than 25 seats as well. Two-thirds of the Brexit Party voters voted for the Conservative Party in the past but are disappointed about the Brexit-stance of the party, which many of them deem either incompetent or as too soft. As the anti-EU EFDD Group in the European Parliament is coming to an end due to the lack of non-British support, it also remains unclear which camp in the EU Parliament the Brexit Party is going to support after the 2019 election.

The two major traditional parties are set to lose most of their European Parliament seats. The centre-left Labour Party (S&D Group in the EU Parliament) may face their worst election result since 1910, the Conservatives (ECR Group in the EU Parliament) are facing their worst election result ever in their 185-year history. The Tories are projected to receive only eight seats (80% confidence interval: 4-10) less than half what they received in 2014. Moreover, their Northern Irish counterpart UUP (ECR) may very well lose their only seat in the EU Parliament for the very first time since the first EU election in 1979. Our latest projection estimates 19 seats (-1 compared to 2014) for the Labour Party, but as the polls have shown the party declining rapidly over the past days, the actual result may very well be much lower. The 80% confidence interval shows Labour between 11 and 23 seats.

The decline of the major parties benefits the Liberal Democrats (ALDE Group in the EU Parliament). The pro-EU “LibDems” are currently at nine seats in our projection but keep gaining momentum since the British local elections earlier this month. The 80% confidence interval projects up to 13 seats for the party, which has currently only one MEP. Additionally, the latest LucidTalk poll suggests that their Northern Irish counterpart “Alliance Party” may pick up their first seat for the EU Parliament. Realistically, the race is, however, to close to call in this case. If the Alliance Party isn’t able to gain their first MEP, we will either see that the national-conservative UUP (ECR) keeps their seat or that the centre-left, pro-Irish reunification party SDLP (S&D) will gain their first seat in the EU Parliament since the 1999 European election. The third Northern Irish seat will probably be one of the tightest and due to the electoral system most unpredictable races on the continent in this election.

The Green Party (Greens/EFA in the EU Parliament), which has currently three seats in the EU Parliament, is a wildcard in this election. The 80% confidence interval shows that they may fail to enter the EU Parliament or gain up to seven seats. The median projection sees them at two seats, but the Greens may very well get more seats as the party is gaining momentum since the local elections: the English and Welsh Greens profit from disappointed Remain-voters leaving Jeremy Corbyn’s pro-soft-Brexit Labour Party.

While the Brexit Party will pick up the plurality of the seats within the British EU Parliament delegation, the latest Panselbase poll suggests that 54 percent of voters want to remain the European Union. 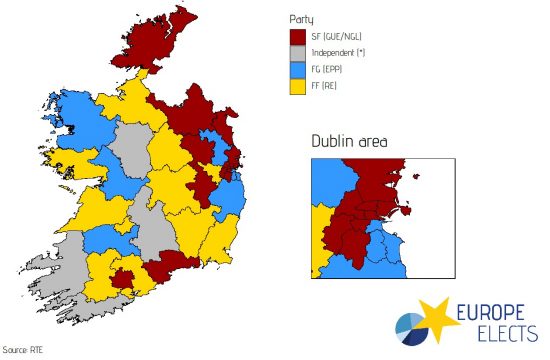