Europe Elects produces a monthly projection on how voters in the European Union would vote, should there be an EU Parliament election today. When comparing seats and popular vote projected to the election result in this article, we contrast them to the EU27 scenario—meaning we exclude the United Kingdom.

Today it has been one year since the European election 2019. The curve of our projection since then has been affected by major three pan-European trends. Firstly, the ‘Green Wave’ sparked before the EU election has flattened from the heights of 74 to around 50 projected seats. This calculation is based on national parliament polling due to the lack of EU Parliament polling, which admittedly has an effect. Given that Green parties are usually successful in mobilising support during EU election campaigns, we cannot say with certainty whether the Greens/EFA group would be considerably smaller if a new EU Parliament was elected today, but the data we have at hand hints at that direction.

Secondly, Brexit in January has altered the nature of the projection as UK citizens lost their representation in the EU Parliament to the benefit of citizens of other member states. Hence, the withdrawal of the UK from the EU moved our projection from the EU28 to the EU27 format in January 2020. And thirdly, the COVID-19 pandemic has affected European voting behaviour—mostly in favour of incumbent national governments.

In the 2014-19 legislative period, the rise of right-wing and national-conservative parties organised in the ECR and ID group was a theme often revisited. Such a trend has continued to take place after the elections. However, during the COVID-19 pandemic, the growth has slowed down and in many instances been even partially reversed. Since March 2020, ID and ECR parties declined by 1.1 percentage points and seven seats in our projection. In the 2019 EU election, ECR and ID had a combined vote share of 19.3% sans UK. This number stands now at 20.7%. In only one year, the right and national-conservatives gained seven projected seats—even though the topic of migration has perhaps become relatively less salient in the public discourse.

Europe Elects’ projection of seats of European Parliament in May 2020

Our projection for the development of polling trends in May 2020 shows that the centre-right EPP Group in the European Parliament would remain the largest bloc in the assembly if there was an EU Parliament election today, with 197 seats out of 705 post-Brexit and a popular vote share of 25.2%. In the EU election last May—discounting the United Kingdom and adding the post-Brexit MEPs around the EU—the EPP finished with 187 of seats and a popular vote share of 22.6%. The current level of support for centre-right parties in Europe is the highest since May 2017. Compared to our April projection, EPP’s growth is especially driven by the Polish Civic Platform (PO) that is the main constituent member in the “Civic Coalition” (KO), the main opposition force in Poland. Based on our polling average for Poland, KO gains 3.4% and two projected EU Parliament seats compared to the April projection. According to the Europe Elects polling average, the centre-right EPP leads voter support in 12 out of 27 member states (Austria, Bulgaria, Cyprus, Germany, Greece, Hungary, Latvia, Lithuania, Luxembourg, Romania, Slovakia, and Slovenia). EPP performs best in  Hungary, where Viktor Orbán’s Fidesz-KDNP coalition reaches 52.3% of the vote. It is important to note that Fidesz’s future within EPP is unclear as the transnational party family has triggered disciplinary measures against Fidesz, stating that the Hungarian government party violates the rule of law in Hungary. Fidesz, on its own part, has repeatedly flirted with leaving the centre-right group on their own initiative. In Estonia, only 5.6% support the centre-right EPP party Isamaa.

The centre-left S&D would come second with 135 out of 705 seats and 18% of the popular vote. This would be 13 seats and 0.9 percentage points less in the popular vote than in the 2019 election—again discounting the UK and adding the post-Brexit MEPs. The S&D Group hosts Socialist and Social Democratic parties like the German SPD and the Swedish Social Democrats (S) in the EU Parliament from across the continent. Europe’s centre-left remains in a deep popularity crisis that is manifested this month especially by the Romanian PRO, which would now fail to surpass the legal threshold to enter the EU Parliament. Fairly untouched by this socialist depression is Malta’s centre-left PL under new prime minister Robert Abela, which climbed to 66.4% support for our May projection. S&D parties lead the polling average in Croatia, Denmark, Finland, Malta, Portugal, Spain, and Sweden.

Trailing the two frontrunner groups by some margin, the third biggest European Parliamentary group in our May’s projection is the liberal RE Group with 98 seats, one seat up from the 2019 EU election sans the UK. In terms of vote shares, the RE Group receives 11.3% in our projection. That is one percentage point less than in the EU election last year. The RE Group hosts political parties such as the French LREM and the German FDP. Compared to April this year, the Dutch VVD stands out with two additional projected seats. The Coronavirus pandemic has propelled the Dutch government party’s national support in the Europe Elects’ polling average from 14.1% in February to 26% in May. The Romanian liberal A2020 also gained two projected EU Parliament seats compared to April 2020. Estonia remains Europe’s untouched liberal heartland with a support of 63.7% for K, R, and E200 (all RE members or intending to join RE). In addition to Estonia, RE leads the polling average in Belgium (Europe Elects estimate there is based on separate polling for Brussels, Wallonia, and Flanders), Czechia, and the Netherlands.

The ID Group in the European Parliament is projected to get 77 out of 705 seats, a vote share of 11.1% and be the fourth largest European Parliamentary group if there was an EU election today. This is one seat more and 0.1 percentage points less than in the EU election minus the UK and adding the post-Brexit MEPs. The result is significant as it is the worst projected result for ID since the EU election 2019, where they received 73 seats. Moreover, it is also the worst popular vote share for the right-wing ID since the 2019 EU election result sans the UK. However, the group is still in the lead in Italy and—based on the most recent Presidential election polling—in France.

The  ECR Group is projected to get 70 seats should an EU election be held now. The group—which amongst others includes the Polish PiS and the Italian Fratelli d’Italia (FdI)—received 62 seats in the pre-Brexit 2019 EU election, discounting the UK and distributing the post-Brexit MEPs. Across the EU, the national parties affiliated with the ECR Group have a combined EU popular vote share of 9.6% in May, which is 1.5 points above ECR’s 2019 election result. The decline in the past four weeks can be associated with the Polish government party PiS (ECR) declining three projected EU Parliament seats. The PiS decline happens in the context of the chaotic delay of the Polish Presidential election. However, PiS remains Europe’s strongest national-conservative party and continues to lead the national polls ahead of its competitors. As of May, the PiS-led ZL coalition reaches 46.8% in Europe Elects’ polling average.

The left-wing GUE/NGL is projected to be the sixth-largest bloc in the European Parliament, should there be an election today, rather clearly behind the five biggest groups. Europe Elects’ May projection predicts the group would receive 55 out of 705 seats, up from 40 in the EU election 2019 sans the UK. In the popular vote projection, the group stands at 8.2%, up from 7.0% in the 2019 election. Support for left-wing parties remains strong in Ireland. There, GUE/NGL affiliates achieve a combined 35.3% in the Europe Elects’ polling average for May. Ireland is the only EU member state where the group holds a plurality of votes.

Greens/EFA was the fifth-largest parliamentary group in the European election in May 2019 without the UK but has since slid to the seventh position. In terms of seats, Greens/EFA decreases from 68 seats and 11.5% in the election night to only 47 MEPs and 7.2% in Europe Elects’ May projection. From April projection to May projection, for the first time since the 2019 EU election Greens/EFA gains projected MEPs compared to the previous month. The performance of the Greens in Europe is largely affected by the support for GRÜNE in Germany; out of 26.3 million projected Greens/EFA voters in May, one fifth lives there. After initial popular decline during the COVID-19 crisis, GRÜNE have been able to gain two projected EU Parliament seats since April. That reflects an increase of 1.5 points in Europe Elects’ polling average for the national level.

The Non-Inscrits—those parties left without a parliamentary group in the European Parliament—would send 23 MEPs with a 4.0% vote share in the popular vote to the European Parliament in May’s projection. 14 of these MEPs come from Movimento 5 Stelle (‘Five Star Movement’; M5S-NI), which is currently Italy’s third strongest political force in polls. New and parties not affiliated with any European Parliament group would receive three seats with a 5.4% vote share in the popular vote. Two of these unaffiliated seats go to the Bulgarian ITN, the remaining seat goes to Lithuania’s TT, which sat with Nigel Farage’s populist EFDD Group in the 2014-2019 EU Parliament but has since moved to a more centrist and pro-EU course.

INCLUDE EU COUNCIL COUNT (% OF POPULATION PER GROUP) 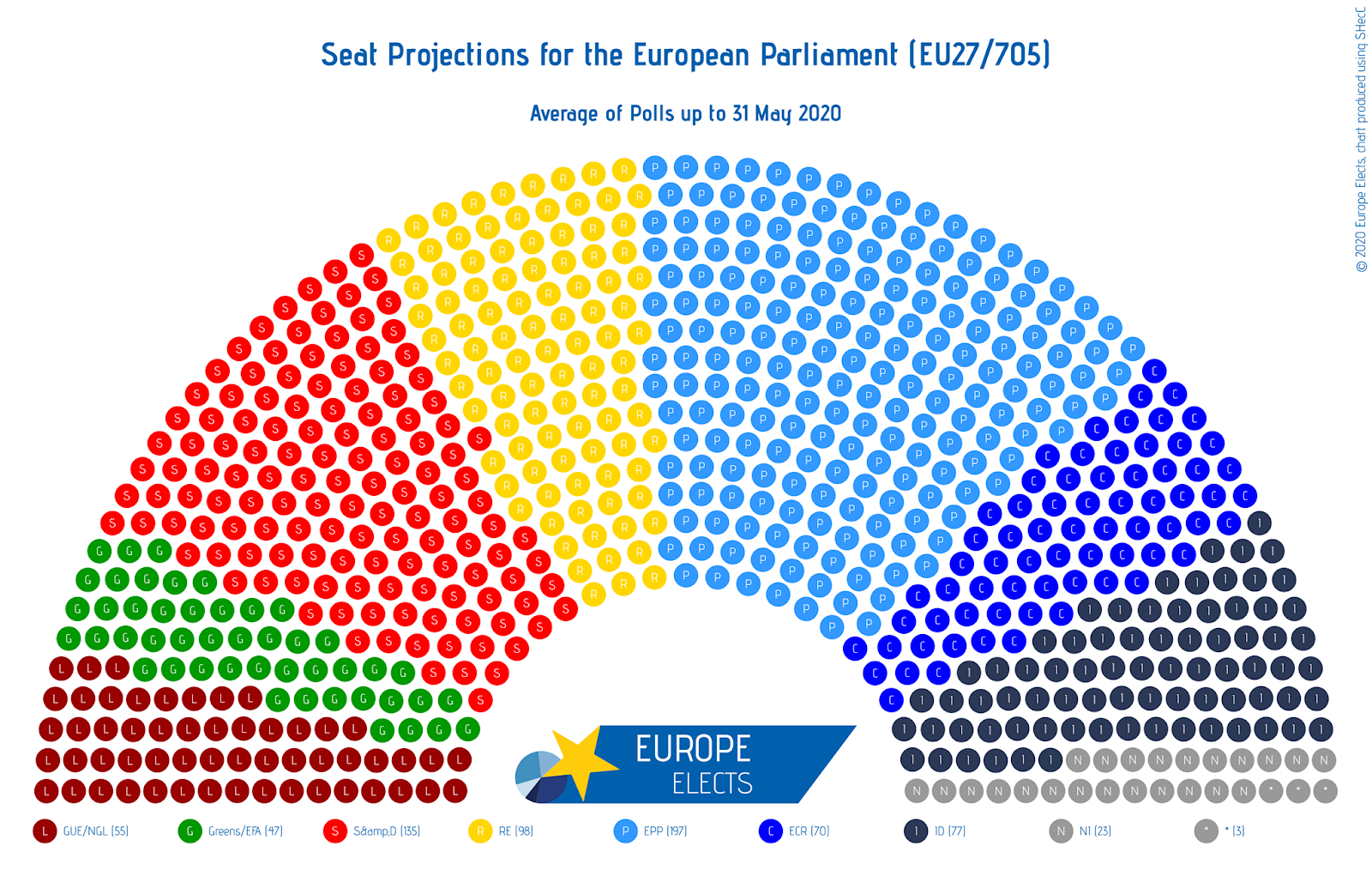 Visit our European Parliament projection site for a more in-depth overview and the methodology behind the monthly projection.